Alexey Steele, born in Kiev, Ukraine in 1967, began his art training at an early age in the studio of his father, the renowned Russian painter, Leonid Steele. He furthered his professional education at the prestigious Surikov Art Institute of the Soviet Academy of Arts in Moscow under internationally acclaimed artist Illia Glazunov. In 1990, Steele moved to Los Angeles where he continues to paint large-scale figurative works, commissioned portraits, and plein air landscapes.

“The Dawn”is a culmination of 15 years in my artistic search. It is my most significant work to date both stylistically and personally.

It is a product of a long quest for finding the most powerful and convincing way of expressing the type of imagery that affects our imagination deeply and expresses truth about our current condition. It is a look at our reality and the unseen forces behind it.

It is a visual statement and product of my thinking on visual language and social purpose of art today, which we call “NOVOREALISM” and which is capable of adequately reflecting our world in turmoil.

This expressive language is based on an inseparable unity of the classical ideal and form with realist color that reflects our modern sensibility, making ART an experiential and emphatic act of contemplating contemporary reality.

The work is conceived as an epic saga spanning the wide range of visual themes that affect senses. The magic, majesty and the promise of a fleeting moment just before sun breaks through a dark horizon and the world is filled with the glow of ever expanding and imminently rising Light. The modern day Madonna invokes the sanctity of motherhood and of a blissful paradise, an island of love, in midst of a dark infinite expanse where forces much beyond our control fight threats we do not see. We don’t know what they are, but feel their presence.

The status quo of the world is crumbling all around us, yet the force of life is inextinguishable and the mystery of a new life holds the future in its hands, in fact being more powerful than all forces of the world.

The unveiling of the work at the World of Art Showcase in 2012 coincided with the last days of the Mayan Calendar which are seen not as a particular moment or an event, but as a perfect symbol signifying the vastly transformative nature of our times.

The world will go on, and it is up to us to chart its future course, but for this to happen we need a revolution of an inspired and elevated consciousness… as we greet “The Dawn” Alexey Steele

For this stunning work, Alexey used a custom canvas stretched with Raphael Oil Primed Linen. To learn more about Alexey Steele’s amazing and epic art, visit his website at www.highartforever.com. 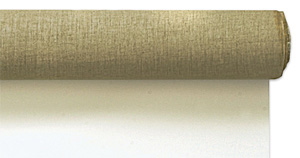