Dangerous Art: One Pittsburgh Exhibit Sends Viewers to the Hospital 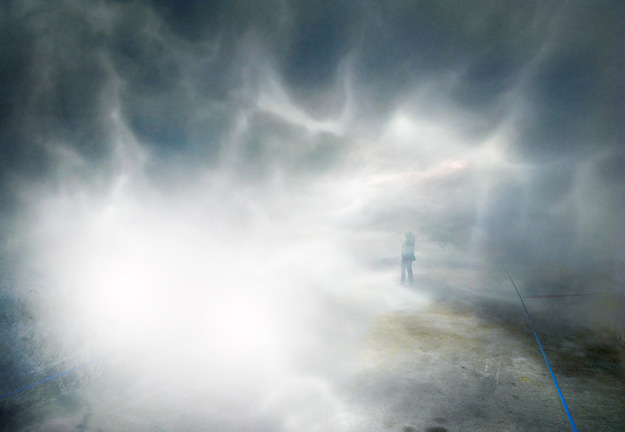 Now, before you can enter the exhibit, hopeful viewers have to sign a waiver notifying them of the dangers of being completely submerged in light, sound and fog. The waiver tells the viewer that the artist cannot be held responsible for any injuries sustained.

Once the waiver is signed, small groups of people are taken through a thick fog filled room guided by ropes for ten to fifteen minutes where they experience a “loss of spatial orientation.” Eerie music accompanies the other environmental distortions to let the viewer experience a total separation from the norm and an other-worldly experience. One viewer described it as “purely sensual” while another viewer asked, “If you didn’t have a body, would this be what death is like?”

The latest victim, a 18 year-old girl from was treated at the scene for “seizure like symptoms” after leaving the exhibit. All people with photosensitive epilepsy, breathing or heart problems, migraines, claustrophobia and anxiety had been warned not to go inside.

The installation is currently closed they retool it to make it a little more safe. Firefighters were even contacted to test the air quality with all of the thick artificial fog involved, but found that the fog was not harmful, even at the high levels used in the exhibit. Even with people being treated at the exhibit, Kurt Hentschlager, the artist who created the art exhibit, could not be reached for comment.

The real question is whether this controversial exhibit should be changed before it reopens? It’s typically okay if art is edgy, but can art be dangerous? Is it okay if it allows the viewer to experience or perceive something differently? If you watch the following video and see the reactions of the viewers who experienced ZEE as it is, is it wrong to change the exhibit when a waiver warns all voluntary viewers of danger and yet, the exhibit itself leaves viewers speechless?

The exhibit will be reopened once changes are made for it in the downtown Pittsburgh Gallery. The question still stands though, should art like ZEE be changed to protect the viewer? How do you feel about the changes being made to an exhibit to make it safer for the general public? Please, let us know in the comments below.