In keeping with our Patriotic Week theme, today we thought we’d bring up a little known fact about the American Military. Most people don’t think of the army as being a source to empower artists when some incredible American Art has come out of it! 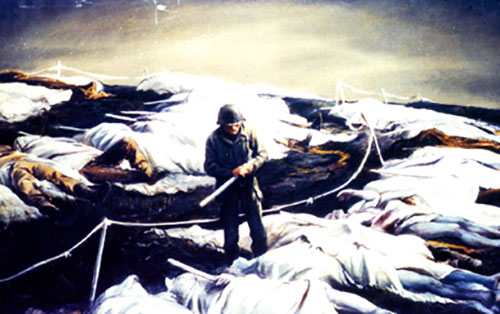 The Army has been officially funding artists dating back to World War I as part of the Army Art Program. It all started as a need to document and record the activities of American Expeditionary Forces, so the army commissioned eight artists as Captains in the Corps of Engineers. Through paintings, these fine captains would capture the action of battles and hard grinds, as well as the downtimes and minutia of everyday life during the war. The purpose of recording these activities was to be able to bring back the experience of war to America’s museums such as the Smithsonian, which at the end of World War I was the custodian of historical Army property and art.

John Singer Sargent, often called the “leading portrait painter of his generation” was one of the commissioned artists with the American Expeditionary Forces. His painting Gassed captures the aftermath of a mustard gas attack with a line of wounded soldiers marching towards a medical station(pictured below).

Jerry’s Artarama loves to honor John Singer Sargent by exclusively carrying one of our favorite linen canvas rolls, the Sargent Herringbone Weave Linen Canvas Rolls. These innovative canvas rolls come in three styles-unprimed, oil-primed and glue-sized for capturing fine details and perfect for realistic paintings such as Sargent painted himself.

The army continued the Army Art Program during World War II in 1943 until the Secretary of War made a contract with the editor of Life Magazine allowing civilian artists to be treated like war correspondents and were provided with the same support already being given to newspaper and film war correspondents.

By June 1945, the Army had started a Historical Properties Section to maintain a collection of over 2,000 pieces of art sadly seized during the war and in 1947, the Army Art Program had over 8,000 pieces of German war art including 4 architectural drawings by Adolf Hitler. Life Magazine allowing civilian artists to be treated like war correspondents and were provided with the same support already being given to newspaper and film war correspondents.

War art continued through the Korean War, Vietnam, Desert Storm and Shield and continues today with the War on Terror. One artist from the War on Terror in particular has gained notable attention for his paintings from Iraq and Afghanistan: Michael D. Fay.

Michael was a former mortar man in the Marine Corps before re-enlisting with the United States Marine Corps again as a one of three combat artists to produce fine art based on their experiences with combat and life on the battlefield. The orders of an artist in the USMC is simply to “Go to War. Do art.”

Some of his artwork can be seen here:

L to R: The Two Hands, Danger Close, and Captain Ross Parrish Directing his Company Over the Top

Fay’s work from the field is currently displayed and can be seen at National Museum of the Marine Corps and the James A. Michener Art Museum in Doylestown, Pennsylvania. You can see more of his art online at his blog Fire and Ice.