Art as a selling tool: selling as an art form!

Art is a medium of expression. More than one artist has described painting as a way of speaking, language without the words. Many works of art present a new perspective, sometimes making sharp insights about society.

Advertising is also a visual means of conveying a message, though it is much more specific. The only message advertising really tries to get across is: Buy this product! Advertisements attempt to persuade the viewer to action, one that is solely centered on commerce.

We may be inclined to think art and advertising are opposed to each other, that they stand for completely different things. While this may be true at times, their relationship is much more complicated than that. Art and advertising draw from each other in ways we may not always recognize. 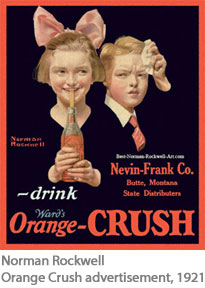 Of course, none of this would have been possible if not for the birth of consumerism. Consumerism has been defined as “the consumption of goods without a compelling or essential requirement.” It adheres to Maslow’s hierarchy of needs. We’ve got food. We’ve got shelter. Now what? We’re bored and we want to feel good about ourselves. So we buy things.

This concept has been credited to Edward Bernays, a nephew and disciple of Freud, who linked sexual needs and desires to consumer products in the 1920s. Since these early days, advertising has often been accomplished through a visual means. One of the earliest commercial illustrators was Norman Rockwell, who created ads for Jell-O and Orange Crush. His Four Freedoms series was used to promote war bonds during World War II.

It doesn’t appear that many people questioned this practice, for decades, until the counter-culture of the 1960s. At that point, artists and activists were questioning everything and the world was in a general upheaval. Art really came into its own as an expression for new ideas. New media, even, were presented.

Notably, Andy Warhol had a lot to say about consumerism through his art. He mocked mass production with his Campbell’s soup cans, his iconic duplication picture of Marilyn Monroe. He closed a gap between art and commerce by bringing commerce into the artistic conversation. He immortalized American brands like Campbell’s and Tide. Interestingly, he also appeared in a television commercial in Japan, in an advertisement for TDK cassettes.

While Warhol tended to goad commercialism, another artist whose work seemed to have not much to do with consumers, also appeared in commercials. Surrealist painter Salvador Dalí was commissioned for TV ads for Alka-Seltzer and Lanvin chocolates.

In the old days, the pre-modern era, an artist only appeared in his art by way of self-portrait. Warhol and Dalí were essentially commissioning their faces — the famous white mop of hair, the pointy mustache — their personal characteristics helped to develop their brand. They demonstrated that art and advertising feed off each other. Art makes a statement about the world; advertising makes a statement about a product. In this, the post-modern era, most media is a comment on or a reincarnation of something else. Now more than ever, there is a symbiotic relationship between art and advertising that must be sustained.

What are your opinions on art, advertising, and the growing links between the two? Are there any more examples you can give us of commonalities between them? Let us know about it in the comments below!