The 2015 Pantone Color of the Year Winner | Jerry's Artarama

The 2015 Pantone Color of the Year Winner 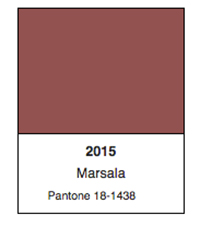 Pantone travels the world to observe color trends every year in search of their next color of the year and had been paying attention to Marsala’s growing popularity in new pieces of art, fashion and other areas of design.  They chose the color Marsala because of its versatility, its embodiment of confidence and stability. This hue is a stable color that sells and performs well in multiple markets.

Pantone’s color of the year has had considerable influence in years past with several industries including home and industrial design, the professional art scene, consumer packaging, fashion and the beauty products market.

Pantone’s color of the year have been representative of our culture and the changing times for decades now. During the 1960s, colors like Hot Pink, Cyan Blue, Bright Violet and Lemon Chrome were picked in response to the changing culture and social revolution. Then in the seventies, colors were picked in conjunction with the environmental movement and the recession. More earthy and less flashy colors were chosen such as Avocado, Burnt Sienna and Harvest Gold. The eighties or the MTV generation saw brighter colors again such as Royal Blue, Ribbon Red, and Radiant Orchid. And so on…

Do you plan on using Marsala in 2015 for any of your art? Do you think we will start to see more shades of Marsala in our paint lines now that it has been chosen as the definitive color of 2015? Let us know in the comments below!