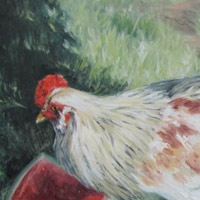 Oil on Linen 16 x 20 Here is a painting of Horus having a summer treat of watermelon. He is a mix breed of Rock, and Americana, so told the man who sold him to me. By the way we thought he was a she and was formerly named Isis, after he started crowing it….. 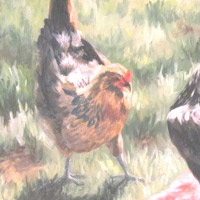 Goals of the Heart by Cheryl Whitestone

Yes it may seem like a ridiculous goal to have chickens (particularly as an adult), but I have had a secret desire to someday have chickens. Last year I realized that goal. As an artist my goals have always been to be a great painter which is, in my estimation, able to capture light and….. 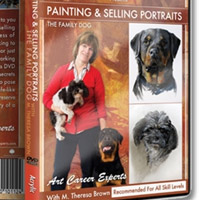 Two of my five dogs think they have achieved stardom because they are featured in a 2 hour DVD!Â Â  There’sÂ  Louie, a shaggy little cockapoo rescued from an uncertain fate, and DaVinci, an impressive looking Rottweiler who, in truth, is a little dog trapped inÂ  a big dog body. Both are my models at…..