Jerry’s will be hosting classes and contests throughout the weekend

The Emerald City Comiccon is celebrating its 12th year in Seattle, Washington March 28-30th, 2014. This year Jerry’s Artarama’s Comic and Illustrative Division will be will be teaching classes, handing out prizes and  will even be hosting a Quick Draw Contest!

Karalyn and Company will be back on the convention scene and are ready for all kinds of excitement. Karayln and others have been attending conventions all over the country this year empowering artists by offering classes, sponsoring art contests, and supporting charities. Karalyn C. Johnson, Jerry’s Artarama’s Director of Comic and Illustrative Division, has been hitting the convention scene for some time as a professional illustrator, sculptor, multimedia artist and technical expert and consultant. She will be out and working the floor with her team alongside Strathmore, Artograph and Prismacolor.

During the Emerald City Comiccom, she’ll be running several events from Jerry’s in the “Jerry’s Artarama Art Classroom” (WSCC Level 2, room 211) including: 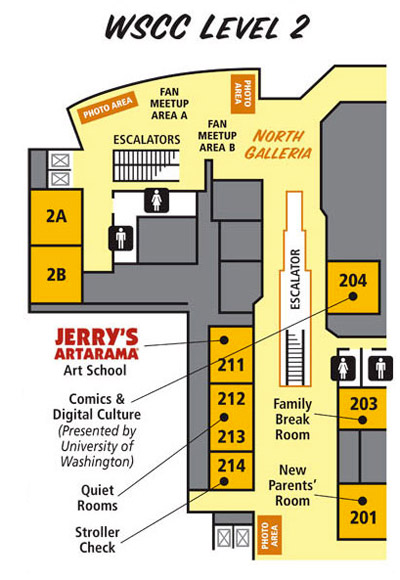 Jerry’s will also be sponsoring a Live Art Event at Club Q. THe upscale Club Q is the site of the vent which will feature live models onstage for artists also stationed onstage at easels to paint the models in front of a roaring crowd. The event will also have music and dancing, and even an auction where the art created on stage will be auctioned off to guests. The proceeds from the auction at Club Q will be donated to the Seattle Children’s Hospital.

This year, the Emerald City Comicon in Seattle promises to be bigger and better than ever featuring artists, actors, voice talents and more special guests as well as tons of events and panels for guests. Jerry’s Artarama is happy to sponsor such a great event. The event is already SOLD OUT so if you are going to attend, stop by the Jerry’s Artarama Art Classroom at the Washington State Convention Center Level 2, room 211 and take a class with one of our fabulous teachers, enter a contest or even just say hi.

We look forward to working with all the students, teachers and the fine staff at Emerald City Comicon.

We look forward to seeing you there!