Earliest copy of the Mona Lisa found in Spain 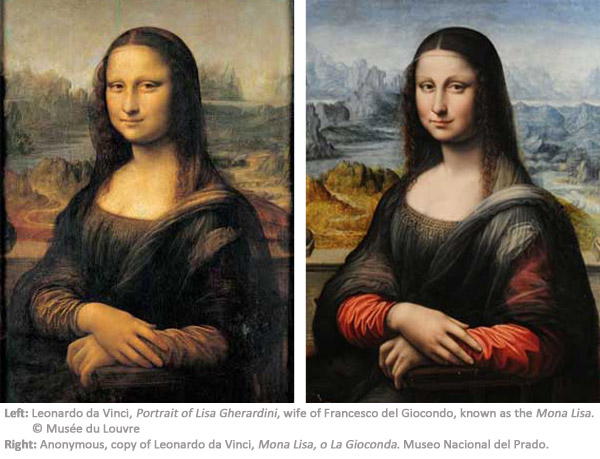 Leonardo da Vinci’s Mona Lisa — probably the most famous painting in the world, right? It’s also one of the most copied paintings in the world, with dozens if not hundreds of replicas created over the centuries. Everyone recognizes it, many love it: “iconic” is certainly a good descriptor of its impact. 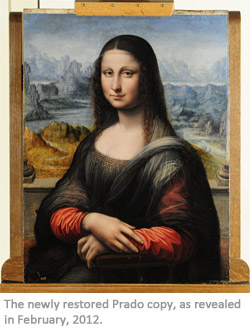 Now, we have even more to learn about this masterpiece. Just this month, the Prado Museum in Spain unveiled an amazing discovery: what is believed to be the earliest copy of da Vinci’s famous piece, most likely painted right alongside the master in his own studio. The Art Newspaper reported the findings, and the news took the art world by storm.

For years, the Prado had in its collection what appeared to be a pretty standard Mona Lisa copy — in fact, some thought it was a pretty poor copy, as the background was a swath of black paint, instead of the dream-like landscape seen in the original. It turns out this black background had been added later, possibly during the 18th century, for reasons unknown, as discovered when the copy was scanned and underdrawings shockingly similar to those of the original were uncovered. 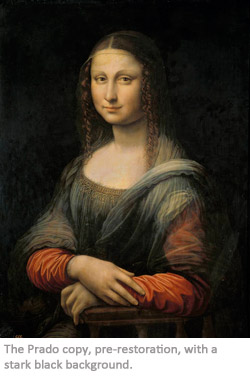 The Prado and the Louvre in Paris (where the original Mona Lisa resides behind layers of glass and security) have determined, based on various factors including panel composition, age, and the fact that the under drawing of the copy changed and developed in a similar fashion to that of the original, that this copy was most likely painted concurrently with the original: side by side with Leonardo, probably by one of his more respected apprentices.

Now that the layers of black paint have been painstakingly removed from the copy, we can see the ethereal landscape background — and since the copy has been restored and cleaned, we have a much clearer view of the Mona Lisa herself. As da Vinci’s original is priceless and irreplaceable, chances are it will never be cleaned; meaning its layers of cracked and darkened varnish will forever cloud our view. Since the copy is no longer so occluded, we can see Mona Lisa perhaps more as she was: a lovely lady much younger than the original makes her appear. Other details, such as the spindles on her chair, the delicate, semi-transparent veil around her shoulders — and yes, even her eyebrows — are far more visible in this copy and can tell art historians much about the original that was thought lost to time. 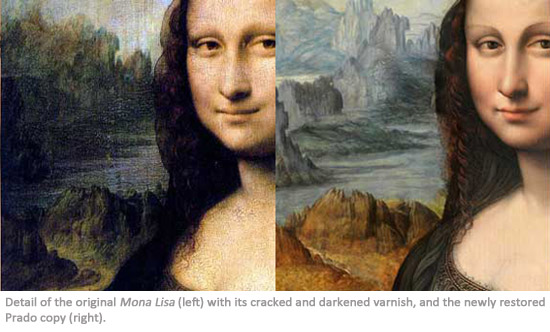 Next month, the Prado copy will travel to the Louvre for an upcoming da Vinci show, and the two paintings will be reunited after 500 years apart. 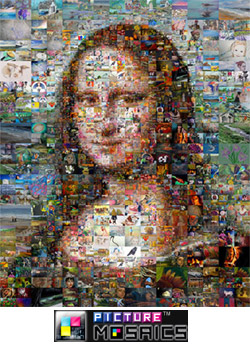 (And speaking of the Mona Lisa, here at Jerry’s Artarama we’re pretty tickled about this new discovery. We ourselves, with help from you, just completed our own copy of the Mona Lisa, as featured on our 2012 catalog cover. While not painted alongside Leonardo, this version of the Mona Lisa was painted by you, our customers and contest entrants, and compiled by PictureMosaics.com into the mosaic masterpiece replica that is our thanks to you for your continued support. Who would have known that the timing would be so appropriate?)

So what are your thoughts on this newest discovery in the art world? Is the Prado Mona Lisa copy a star or a sham? Which version do you prefer, and why? Let us know in the comments below!