Did You Know- Vincent Van Gogh

Little Known Facts About One of Our Favorite Painters!

Yesterday was Vincent Van Gogh’s birthday! And while we know that he is  the father of Post-Impressionism and the painter of such favorite paintings as Starry Night, sunflowers, wheat fields, self portraits and cypress trees, there are still a lot of interesting facts that fall to the wayside. So, for your entertainment, here are some fun and intriguing facts about one of the greatest painters to have ever lived.

Van Gogh was born in Holland.

Van Gogh painted his most famous masterpiece, Starry Night, while residing in a mental institution. 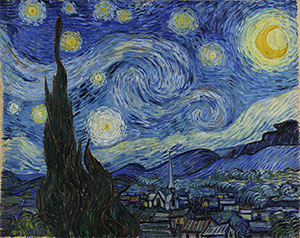 Vincent only sold one painting during his lifetime.

He painted approximately 900 paintings in only about 10 years, thats amazing!

When he was a child, Vincent had to walk past a tombstone with his own name on it on the way to school- the tombstone belonged to his brother with the same name who died as an infant.

Vincent was good friends with another famous painter, Paul Gauguin.

The story of Van Gogh cutting off his own ear may have actually been false as new evidence suggests it was his friend, Paul Gauguin who cut his earlobe off.

Van Gogh has painted over 30 self portraits of himself between 1886 and 1889. Narcissistic much? He should have entered our Self Portrait Contest as he would have surely won.

Vincent was known for eccentrically wearing candles on his hat so that he could paint at night.

Van Gogh used LUKAS oil colors and wrote this to his brother Theo about them in 1885:

“I have ordered colors from Schoenfeld [LUKAS] in Düsseldorf, as there were some colors which I couldn´t get here…the picture with the potato eaters is not good in some details…I should have had a better result with the mineral blue that I have now [from LUKAS], instead of the old one.”

Jerry’s Artarama carries many products under the Van Gogh name including: 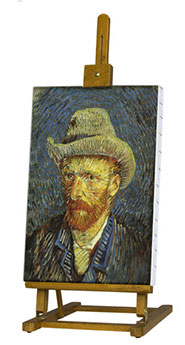 One of the strangest things about Van Gogh’s supposed suicide is that he might have been in fact, murdered. It is now thought and speculated that a local teen bully may have murdered him. Evidence points out that no gun was found where he was shot, his hands showed no signs of gun burns, and because he would have been unable to hold the gun close enough to his body to shoot himself. However, the verdict is still out.