Her work is included in over 60 corporate and museum collections including those of Sam Walton, founder of Wal-Mart and George Steinbrenner, owner of the NY Yankees. She was named one of the top 200 artists in 1993 by the Artists’ Magazine and has been profiled in “The Rotarian” an international publication; she was also selected as an “Artist to Watch” by Southwest Magazine. Nelson’s works are also included in two 2011 books, Best of America: Oil Artists and 100 Southern Artists. 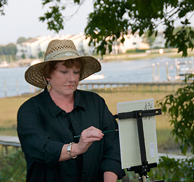 Sandy Nelson has been a professional artist for many years. She studied Fine Art and painting at the University of KY and the Scottsdale Art School. Her portraits and landscapes have been accepted to national juried competitions from Maine to California, many winning national awards.

Like many artists, I was a creative kid… always drawing and observing. It seems that, for the most part, we’re right-brained straight out of the crib. There never was an “a-ha” moment when I decided to become an artist; it was just the natural order of things. And the natural order led to majoring in fine art. While in college, I ran the gamut of required courses in all manner of media, clay, printmaking, textiles, but paint was the thing that made my soul sing. I discovered pastel and oil and the joy of brushes loaded with color. For the next several years, I painted a mile or two of canvas on the kitchen table and honed my drawing skills while raising four children. Multitasking became a way of life!

As the kids started school, I worked as an advertising freelancer, an artist for a thoroughbred racing magazine, did Yellow Page ads and took many a commission from printing companies. Bills do not have much of a shelf life. Before I thought my work was mature enough to seek out galleries, I entered every local/regional show I could find. When awards became numerous, I tried the national ones and was pretty surprised to be accepted and blessed with awards. A few galleries offered representation and that’s the path to now… twenty plus years of exhibiting and lots of brushes loaded with color using only the The Best Oil Paints

I moved from the green hills of Kentucky to the coast of North Carolina for, what I thought, would be a year or two of painting the marshes and beaches… that was eleven years ago. Everywhere I’ve traveled has been an interlude; the coast is “home.” And that sense of place has brought about a new venture!

In late June 2012, a brand spankin’ new gallery will open in Wilmington, NC… mine! I’ve taught many workshops and classes for other organizations, but now they will all be in my own Nelson Fine Art Gallery and Studio. Since I know the excitement I always had taking workshops from artists whose work I admired, I hope to bring that to my own space. On-going classes in different media are being scheduled and the workshop schedule is shaping up. All that will begin with a “grand” opening in September. The gallery is just a bridge away from Wrightsville Beach in the Lumina Commons shopping center, 1982 Eastwood Road, Wilmington, NC. Being a tourist area, there are plenty of things to do and wonderful restaurants and hotels.

Anyone who would like to keep up with the workshop and event schedule can email me at sandynelsonart(at)yahoo(dot)com. The Nelson Fine Art Gallery and Studio website is being developed and should be up in a couple of weeks!