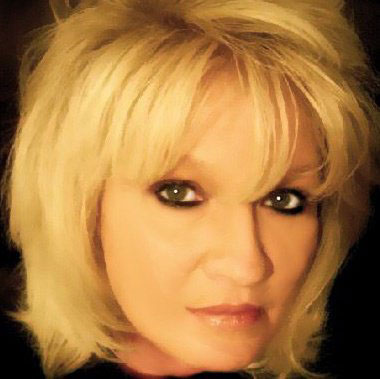 Vicki Gould was born and reared in southern, rural Indiana but has deep Kentucky roots. Her father’s family was longtime residents of Carter County, Kentucky and her mother’s family called Clay County, KY their home for many years. Vicki currently lives on a small hilltop farm in wester Elliot County where she enjoys tending chickens, turkeys, rabbits, and her beautiful Golden Retrievers. Vicki loves outdoor activities like fishing and simply admiring and enjoying the beauty of nature.

As a young child, Vicki had a great interest in drawing and would add her own drawings to her school work. Vicki put aside her interest in drawing to raise a family. With her lifelong passion for drawing, her family and friends inspired and encouraged her to start drawing again. 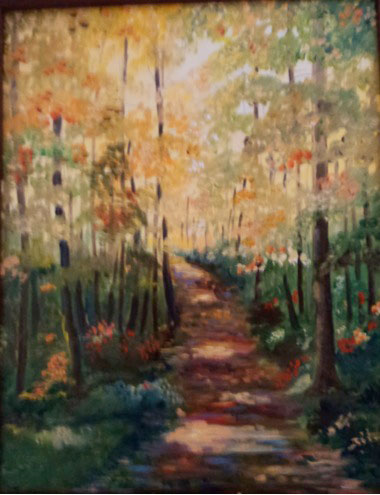 An Impressionistic Trail in Eastern Kentucky.

Getting Reintroduced to Art

While Vicki has loved drawing all her life, she only recently began painting about ten years ago. She started her painting under the tutelage of Keith Klein in his Florence, KY studio. Vicki works exclusively in oils and mostly enjoys painting in the Impressionist style. Monet and Renoir are among her favorite impressionists. Vicki also loves the paintings of Rembrandt and is overwhelmed by his technical flawlessness and his ability render subjects absolutely realistically.

Vicki loves painting with SoHo Urban Artist Oils. She just recently began painting with them, but has found them to be incredibly smooth with little need for additional mediums. SoHo Oil paints give her the color saturation and consistency to paint in either the realistic or impressionistic style. 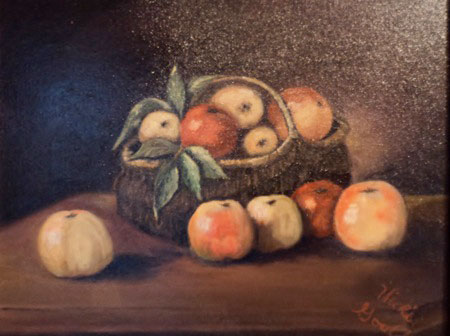 This painting is a still life in a realistic style.

Vicki has been painting since 2001. She was won several ribbons in juried art shows having recently won Best of Show Non-Professional, in Morehead, KY. Although she did not initially think she would find any arenas promoting art in her rural area, she instead found an abundance of artists who specialize in everything from folk art to sculpture to fine art. She has been featured in the Art Center at Laurel Gorge and at the art gallery “Gemini” in Illinois. Vicki has paintings all over the United States and also in London, England and Moscow, Russia. Vicki is a member of the Tourism board, Women’s club and Foothills Eco-Agri Tourism (FEAT). She also enjoys promoting art in her community with the students and women in the areas near her farm.

To see an example of Vicki’s paintings and follow along with her step-by-step in an example of realism, check out her creation with Jerry’s Online Street Team Art Project with Vicki Gould!